The International Dupuytren Award recognizes exceptional scientific publications on research or clinical treatment of Dupuytren and/or Ledderhose disease. Research can be about treatment, epidemiology, pathogenesis, genomics, or other areas, like anatomy, improving the understanding and treatment of these diseases.

The Award carries a monetary prize of 1,000 EUR.

The publication must be an original research paper that has been published in a peer reviewed journal or book and that has not yet been awarded elsewhere. The Award will normally be given to the leading (first) author but, upon request, the prize money can be split. Applicants can be physicians or scientists. Please submit only one paper per leading author, not several. We recommend to submit the paper that you consider presenting the most outstanding new research or clinical aspects.

Who will elect the winner?

The award in a specific year is given for a paper that was published in the previous year. For example the Dupuytren Award 2010 was given for a publication of 2009.

Where to submit your application?

Please email your application to

The International Dupuytren Award 2018 has been exclusively funded by personal donations from members of the Dupuytren Disease Support Group (DDSG) and the Britsh Dupuytren's Society (BSD). A big thank you for this great support of Dupuytren research!

The Award was presented on 15 March 2013 at the Dupuytren's Summit in Vienna. The winners of the 2013 International Dupuytren Award are

of the University Medical Center Groningen, the Netherlands, for

For Basic Research: Syed A Iqbal and Christopher Manning (together)

"Identification of Mesenchymal Stem Cells in Perinodular Fat and Skin in Dupuytren’s Disease: A Potential Source of Myofibroblasts with Implications for Pathogenesis and Therapy"

The Award 2012 was presented at the Symposium "New Frontiers in Dupuytren Disease" (Leuven University, Belgium, 31 March 2012). The winner is

of the University Medical Center Groningen, the Netherlands, for his paper Guido Dolmans et al. In 2011 the the Award was given in two categories, for Clinical Research and for Basic Research. It was presented to the winners on 5 November 2011 at the Dupuytren's Summit in London. The winners of the 2011 International Dupuytren award are 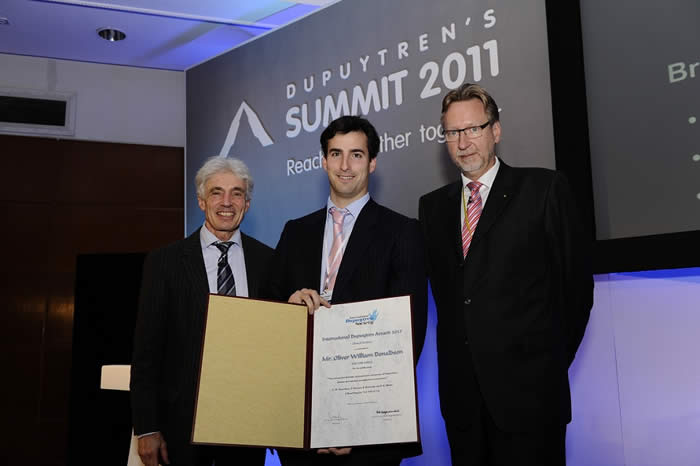 For Basic Research: Neda Mosakhani and Mohamed Guled (together) 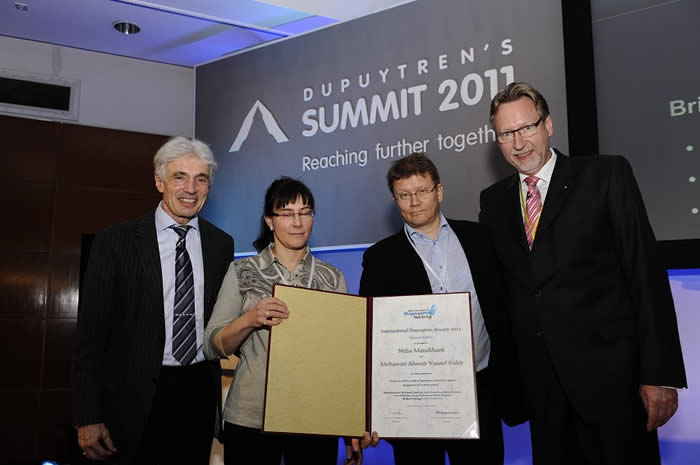 On behalf of the two winners two members of the research team, Dr. Minna Forsman and Prof. Jorma Ryhänen, are receiving the International Dupuytren Award for Basic Research

The Award 2010 was presented at the Annual Conference of German Hand Surgeons (DGH 2010). The winner is

of the Katholicke Universiteit Leuven for her doctoral thesis The International Dupuytren Award is presented to Prof. Ilse Degreef by Wolfgang Wach of the